LPG-Fueled Vehicles: An Overview of Technology and Market Trend 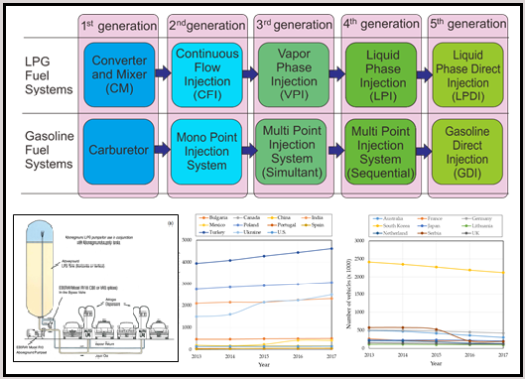 This article presents an overview of the technology status and market trends of LPG-fueled vehicles through the literature approach to re-evaluate their future. In the review, it is discovered that LPG vehicles are globally increasing, though with a concentration in some countries. Of the 25 countries included in the World LPG Association (WLPGA) annual report 2018, Turkey, Poland, India, Ukraine, and Mexico are the countries with the best LPG vehicle trends in average of 23%. Meanwhile, Australia, Japan, South Korea, United Kingdom, the Netherlands, France, and Germany with a long history of implementing LPG as an alternative fuel has experienced a decline in the 2013-2017 period by 17%. This was allegedly due to the penetration of diesel-fueled vehicles over the last ten years. Moreover, developed countries experiencing decline have succeeded in developing electric-based vehicles such as Hybrid Electric Vehicle (HEV), Plug-in hybrid electric vehicle (PHEV), Battery Electric Vehicles (BEV), and Fuel Cell Electric Vehicles (FCEV) due to stringent demands for emission standards.